7. The Vision - The Lost Coast 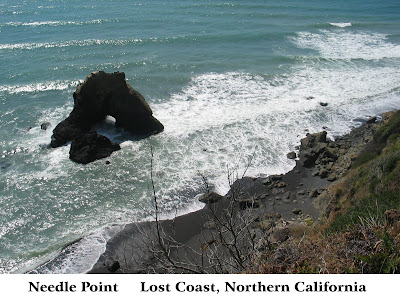 Thomas Merton took his photos on the lost coast about halfway between Needle Rock and Bear Harbor. He talked about seeing trucks and people fishing so I assumed I would be able to drive to the exact spot and from there walk the beach looking for the places where he took his photos. I could then paint the same scene in the exact spot.
The Reality
When I had told a Sister at the monastery of my intentions she said that the area where Thomas Merton took his photos was very difficult to get to. She said it was a 13 mile, steep one lane dirt road with deep ruts and no turnouts. She recommended we not go. But I was determined, so went anyway. We made it to a small ranger cabin that sat on the bluff near Needle Rock. The road beyond that to the beach area was only accessible by four wheel drive vehicles. We spent the rest of the afternoon taking photos. I only found one place where the shoreline matched one of Thomas Merton’s photos. But from the bluff it was not the same angle. My painting plans were dashed.
Posted by Maestro at 9:16 PM